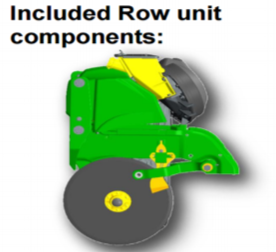 The new ExactEmerge planter technology from John Deere has taken planter productivity to new levels while improving corn stands and emergence.  Don’t trade your planter-upgrade it!

Please contact your local Sloan Implement location before July 14, 2016 for early order program pricing on this breakthrough planter technology or to get more information! 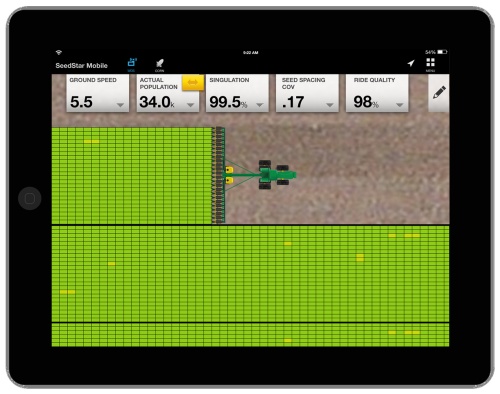 Hope all is going well with this year’s planting season.  Last year John Deere introduced SeedStar Mobile with the ExactEmerge planters.  Retrofit kits are available for 2011 and newer 1770NT and 1790 planters.   SeedStar Mobile gives producers easy access to their planting data and provides the mobility they need to view the data at any time or place.

Last year the key function was high performance seed monitoring on your iPad to easily spot performance issues on a per row basis.

To do so, select the menu, then select field review. 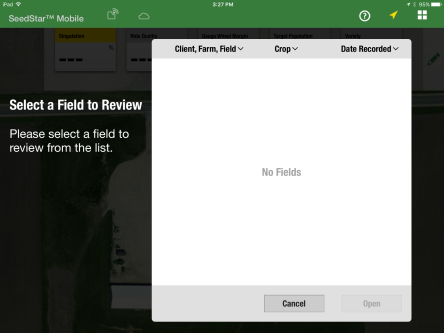 You can then pick the field you would like to scout and review the “as planted” map.  You can view planting data as a map overlay relating to:

Field Review provides the grower the ability to perform basic crop scouting activities after the crop has emerged.  As long as you have an iPad with GPS you will see a little blue dot in the field for your current location.

You can then walk to the trouble area or hybrid change and see what issue you may have had or to see how that hybrid is performing.  The data can also be uploaded to MyJohnDeere operation center to view from your home.

Seedstar Mobile also allows you to remotely monitor planter performance in real time within the John Deere Operations Center.   Remote monitoring helps the grower or manager ensure the planter is performing properly without having to be at the field or inside the tractor cab.

If you are interested in purchasing SeedStar mobile or have more questions on it, please contact any of our 20 Sloan Implement locations. 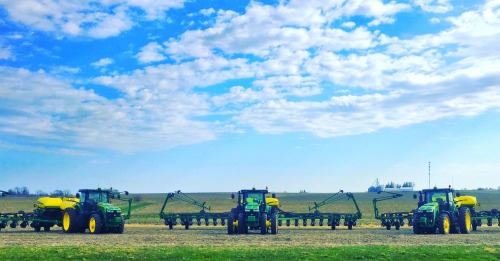 We get a lot of questions about switching the planter from corn to beans, and for good reason.  Sometimes it is pretty simple, but for other models and monitors it is not quite so easy.

In a John Deere Vac planter with a Pro-Max 40 disk, obviously you will need to change the disk from the 40 cell corn disk to the 108 cell soybean disk.  You will also need to change the “knocker” wheel in the black meter vacuum chamber door to the “wiper.”  If you have a mini hopper planter you will also need to change the short brush with the “double stair step” to the brush with the “single stair step.”  The long step will go towards the outer radius of the meter.  The short step will be towards the inner hub of the meter.  Make sure you don’t install backwards.  Vac level settings should be around 8” of H20.  You will need to use talc in central fill planter even with beans.  If the beans are treated, you will need to use about the same rate of talc as what is used in corn.  Untreated beans can usually have the talc rate cut in half from corn.  If it is a warm humid day, take extra care to use plenty of talc and make sure it is well mixed in the hopper with the seed.

If you have a planter with a variable rate hydraulic seed drive then you will need to go into the section in the monitor where you enter the target rates and change the selected disk to “soybean.”  Failure to do this will result in an extreme overplant condition.  Keep in mind that the high rate sensors on many planters 10 or more years old will not count every bean, especially in a 30” row.  They can be 5-10% lower than the actual depending on a lot of factors.  Even the newer accu-count sensors may show slightly lower that the expected.  If the monitor is showing lower than expected, double check the beans per foot in the seed trench to verify that you are getting the correct population.

In an Exactemerge planter, you will need to use the 64 cell soybean bowl.  The “rumble strip” at the lower radius of the meter housing will need to be changed to the smooth unit.  Next, the double eliminator will need to be lowered to extreme lower setting line.  This will be well below the 3 corn setting lines.  Don’t forget to change the selected disk in the seed setup portion of the monitor to the soybean bowl and select your target population.

If your planter is a 1790 split row planter there are a couple more items to check.  In the monitor under the seed setup where you put in your target population, you will need to select the number of rows for beans.  If you have a 16/31 planter for example it will show a 16 or a 31 with a box.  Select the 31 and the monitor will change your row spacing and turn on the additional seed sensors automatically. If you have a 350 monitor you should only need to change the “Split” button and the monitor will change the row spacing and turn on the other sensors automatically.  Don’t forget to let down your back rows off of the stops so they will engage the ground at the proper depth as well.

You view more information on the Deere seed meter on this video:

Good luck throughout the rest of the spring planting season.

Sloan Support is written by the product support team at Sloan Implement, a 20 location John Deere dealer in Illinois and Wisconsin.   Learn more at www.sloans.com

Spring is finally here. We have been really busy finishing up installs and getting planters ready . NH3 is getting close to done. I had a few planters start yesterday with more this week to get started.

I had the opportunity to work with a customer and his new Raven Vortex HP NH3 system. It is a single cooler system that runs a pump to increase the NH3 pressure. He installed on a 2510H 23 row. With a single cooler he could run 8 MPH at 200 units per acre. This system is full ISOBUS and runs through the GS3 2630 without the need of a rate controller. The GS3 also uses the Section Control to shutoff sections of the bar. It was also very easy to set up and run with the GS3.

I ran into an issue where a AT Controller on a Case IH was throw a fault in the Raven setup screen along with code ACI 522390.09. I downloaded the latest Raven software and the customer ran for 2 days then it threw the same code again. I re-downloaded the software again and it worked, but I also did a DTAC case and will keep everyone updated once they get back to me.

Seeing a lot of down force sensors reading zero yet. Seems like a few things can get them working again. Raise planter and zero, calibrate height switch, disable and re-enable. There’s also a DTAC case that talks about resetting the PM2 controller as a last resort, but I haven’t had to do that yet.

Joe Brunker and Jon Reynolds found a bad poly phaser( part used to protect the amp from lightning strikes ) was the problem on weak signal at the Hazel Green leg.  With that said all towers are now up and operational.  With a few more climbs we will be finished on all towers.

During a few installs, I noticed that our RTK signal was very strong.  In several cases I was able to get 100% RTK data received inside steel machine sheds, and in one case that was 8 miles away.  Another instance was getting the Shullsburg tower all the way up to the Lancaster tower (30.98 miles away), unfortunately the Deere software won’t let you run that far from a tower.  All of the current RTK customers have begun gator mapping and have reported better coverage than they expected.

Bill adds, “this past week I had the pleasure of fighting a 1770 that had Precision installed on it.  The planter needed a new d.p. node installed and while we were installing it we also installed new software and dielectric greased the connectors.  Before we left I checked over all settings and verified that it was correct.  A few days later customer is called complaining that the software made a bunch of his sensors not work and throw codes.  After another stop to their farm, and the better part of the day with help from a Cuba City tech, we realized that the Precision Planting 20/20 was booting up after the 2630 causing sensors for both vacuum motors and other random codes to be thrown.  They all went away and planter preformed normally when the precision stuff was removed out of the system.  I truly feel that during season calls for random “odd” errors our first diagnostic test should be to remove any and all precision harnesses.  9 out if 10 times it would solve the problem.”

Bill also had an iTc receiver on 4830 sprayer with 2630 display.  The display had an error message of no GPS signal and couldn’t be accepted to move to another screen.  It ended up being software.   Receiver would work on another display, so I loaded software on that first and then was able to get the customers display to acknowledge and also take new software

New 1790 planters will unfold with the rock shaft units in the raised position. Follow D-Tac solution 67973 and make adjustments as necessary. Lots of damage occurs when these are folded out with the units raised.

New 4038R set up finding a noise in the right front corner of the cab, following all solutions did not prove any results. Only seems to occur on rougher roads and only while going down- hill. We delivered to Customer and they are aware of the problem and will continue to monitor. Have also entered a D-Tac case.